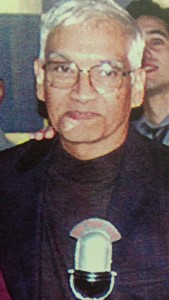 Willie Medina, a resident of El Barrio/East Harlem for many years was a native son of Ponce, Puerto Rico. Willie passed away on February 22, 2015 at Mount Sinai Hospital where he was being treated for diabetes and a heart condition.

Throughout his lifetime, Willie contributed to the cultural life of New York City and the Puerto Rican community.  For seventeen years he co-produced “Rincon Caliente” a Salsa music show, every Thursday from 2pm-6pm on WHCR- 90.3 FM at The City College of New York. He also conceived, produced and distributed the “Willie Medina Salsa Hotline,” a listing of all the Salsa music shows that air on stations across New York City. He was an active member of “Los Old Timers De La Calle 111” and he was a regular guest on Johnny Cruz’s “Las Ventanas De Latin-American cable TV program.

Our deepest condolences are extended to the Medina Family. Our WHCR-90.3FM family will truly miss Willie Medina.